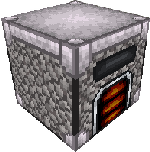 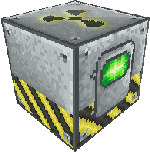 The Furnace is a tool in Pickcrafter that allows the player to craft Blocks by following its recipe. When the player first uses the Furnace, a tutorial is provided. The player is given 5 Dirt, and is directed to craft 1 Clay.

Every furnace recipe requires at least 1 second of crafting time. Almost all Blocks and Mobs Drops are available to craft, and some special Blocks are exclusive to Furnace crafting, listed below.

The player can craft 1, 10, 25, 50, 100, or Max Blocks, the latter 3 options only available after unlocking the Durable Furnace skill in the Idle Skill Tree. The player can also boost the Furnace to speed up crafting by watching an advertisement, which randomly gives them a 2x, 3x, 4x, or 8x boost, and they can watch more ads to reroll as many times as they want. In an update during Version 3.0, a 10x boost was added. Elite Members have a permanent 10x boost.

When the player upgrades the Furnace to the Atomic Furnace through the Idle Skill Tree, the sprite of the Furnace permanently changes, and it gains a small chance to craft two items instead of one. This duplication can be upgraded further with the Furnace Research skill.

The Furnace can have designs affiliated with some Events. They only appear when you craft the Blocks from the actual Event 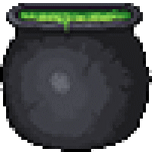 You can only craft these Blocks with The Cauldron design during the Spooky Event:

You can only craft these Blocks with The Oven design during the Harvest Event: