Skills can be discovered in PickCrafter after unlocking the Skill Tree. There are three skill trees:

Skills can be unlocked and upgraded on Skill Trees, and some can be further upgraded with Artifacts, by transcending (see below), or both. Players who played the game prior to Version 3.0 and purchased Fuel, Lighter, Block Doubler, and/or Hopper upgrades also received extra Skill levels for those upgrades, in the form of the Legacy Relic.

Skill Points are used to unlock and upgrade skills, and are purchased with Picks. When all Skill Points have been spent, it is possible to respec all spent Skill Points on a tree for 30 Runic.

Each skill has a default max level up to which skill points can be allocated to the skill. Beyond this, there are two mechanics in the game to upgrade skills even further:

Transcending becomes available in the Ender Shop after Prestige. All three trees can be transcended separately, allowing many skills to be upgraded once more. The first and second Transcend of a skill tree costs 1 Ender Pearl, with each subsequent Transcend costing 1 more Ender Pearl up to a maximum cost of 15. Each skill tree can be transcended an indefinite number of times.

Artifacts can also provide extra levels of certain skills. These are only applied if the skill has been unlocked. Through upgrading the artifact, it can accumulate multiple levels of the same skill, though the gained skill is randomly chosen. 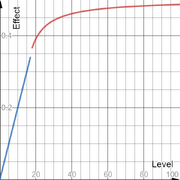 All upgradable skills have numerical effects whose values are computed from the level according to the same shared formula, but each skill uses a specific set of parameters. All effects start to grow linearly first, but most skills have a transition level from which onward they converge hyperbolically against a set limit. The formula used is this:

With the following symbol meanings:

To determine the parameter values for a given skill, for h and s it suffices to solve from two arbitrary points from the linear region. For the hyperbolic region, if t was noted, two points are also sufficient to obtain l and d. Alternatively, if t was missed, all three can be reconstructed from three points by solving a system of three equations, but this method is numerically highly unstable and as such sensitive to rounding errors. Since the game displays skill effects rounded to only two decimal digits, points with smooth values (preferably no or only one non-zero decimal digit) must be used or the underlying exact fraction must be guessed.

In the following, the given parameter values yield the effect value as a decimal fraction. For the corresponding percentage, multiply the number with 100. If h is the default 0, it is omitted. If t has not been found yet, it could mean either that there is no transition level (i.e. the skill is not capped), or that it has not been reached yet by the contributors of this article; which is the case can not be distinguished until higher level data is contributed. Therefore, we denote t > H where H is the highest level anyone has ever checked and confirmed the effect still scales linearly at that point. In this sense, we consider an uncapped skill to be specified as t = ∞, but this can never be confirmed experimentally and is therefore not used; the notion is just consistent with the t > H notation, as ∞ > H is true. Any reader with access to higher H is encouraged to update this value accordingly if the effect is still linear, or if it's not provide the actual value for t. If t is not known yet, l and d are unknown or undefined and will be omitted.